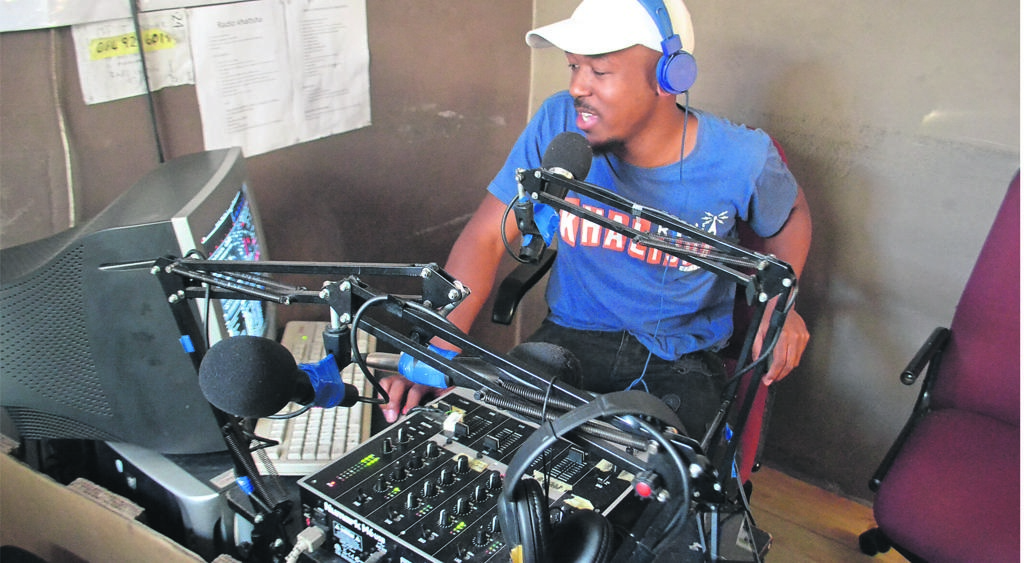 NEWS24 – Living a dream in his bedroom

Khayelitsha DJ Mzuvukile Monco, tired of having doors being slammed in his face, has now started his own bedroom radio station.

He is the brains behind Radio Khaltsha and has been running his boudoir show for two years in a row and has a listenership of about a thousand regulars. According to Monco,25, he found a way to pirate the airways in 2015, after he logged into a radio signal by mistake. “It was by happenstance but luckily I’m good with technology, so I started exploring it … In the first few days, I could only reach people in my street. I also had a friend whose dad had an antenna, so we used that antenna to spread our reach and that was the birth of Radio Khaltsha,” he said.

Monco obtained an N5 certificate in Electrical Engineering at Northlink College which helped him set up his make-shift studio at home. “As an upcoming DJ, you struggle a lot getting access to platforms such as radio, TV and events. You find so many people blocking your way, so this is our (referring him and other DJ friends) way of creating a platform for the underdogs,” he said. The station consists of seven volunteers who run the station and 14 other presenters who run various shows in the line-up. The majority of the talent is youngsters from Khayelitsha, which is what he had aimed for as the founder. Their slogan is “Youth Empowering The Community” and their shows emphasise this notion. “We have various shows that are driven by the youth where we motivate and also expose local youth owned businesses. We unfortunately have a revolving door of talent because while some of them get jobs, others get opportunities to work in other radio stations,” he said. Monco said that he was happy to see growth, which includes streaming digitally.

Their other concern is about Independent Communications Authority of South Africa(Icasa) approval. He says they are working on this but will continue broadcasting from his home. He said he has sacrificed his own bedroom by turning it into the studio. “At first it was difficult as we used to sit on my bed and broadcast. Sometimes I’d be sleeping and someone would be presenting a show,” he tells the City Vision team as he gives out a roaring laughter.

One presenter who has been marvelling at the opportunity is Lubabalo Ncipha, 24, who spearheads the Amazwi Enkuthazo Show weekdays between 10:00 to 12:00. He says that his show is about motivation. “I have learnt a lot about radio in the past two years. My show is about encouraging people to go for the dreams,” he said. Learning to entertain people was what amazed him most, said Ncipha. Its a talent he had not been aware of, he added. Monco said that his dream is for his show to stream worldwide but he was happy for the progress Radio Khaltsha has made.